Spain has traditionally been a country where the coast and beaches have acted as raw material to develop the current tourism industry. This has always led diverse scale works and coastal transformations by Public Administrations in order to satisfy tourist needs and striving to attract a greater number of travelers. However, little and less is known about the objective impact on tourism reached by the final coastal typologies taken as a lot, rather than as a specific singular milestone. Therefore, this work has carried out a study of the 24 coastal provinces of Spain, using 31 variables to analyze the characteristics of 3,470 beaches along 1,905 km of Spanish coastline, to subsequently compare the obtained data with the average number of travelers of each province, in order to search for correlations indexes (R2) that may show tourist behavior patterns according to the variables analyzed. Starting from an initial analysis in absolute terms with low correlation rates, it can be seen that trends vary if Spain is divided into four different geographical areas, North, East, South and islands, showing significantly different correlation rates according to beach types, meteorology, and services in each location. The studied correlations show a great geographical segmentation in the concerns of tourists and may serve as a guide for public and private entities to have objective criteria to establish regeneration typologies in coastal works, based on the desired result concerning tourism and sustainability. It may also reveal that some present and past actions, like regenerating gravel beaches using sand, that pursued this same objective share no relationship with tourism according to this study.

COMMUNITY-BASED TOURISM IN RURAL JAPAN: THE CASE OF A NETWORK-MAKING NON-PROFIT ORGANIZATION

ELEMENTS TO FOSTER FRIENDLY RELATIONSHIPS BETWEEN PORTS AND TOWNS: PHOTO ANALYSIS OVER BOUNDARIES AND OVER TIMES

CIVIL RESISTANCE VS ENVIRONMENTAL IMPUNITY IN THE BAY OF PUERTO MARQU&#x00C9;S, ACAPULCO, MEXICO 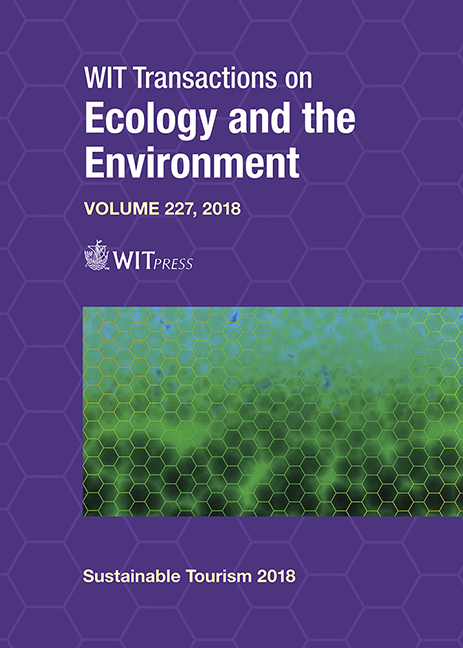 COMMUNITY-BASED TOURISM IN RURAL JAPAN: THE CASE OF A NETWORK-MAKING NON-PROFIT ORGANIZATION

ELEMENTS TO FOSTER FRIENDLY RELATIONSHIPS BETWEEN PORTS AND TOWNS: PHOTO ANALYSIS OVER BOUNDARIES AND OVER TIMES

CIVIL RESISTANCE VS ENVIRONMENTAL IMPUNITY IN THE BAY OF PUERTO MARQUÉS, ACAPULCO, MEXICO