HUMAN PERCEPTION AND AESTHETICS OF FAÇADES

The spherical eye delivers only in a very small angle range of 2° (the fovea) a sharp vision. To generate a sharp image of the whole field of view, the eye scans with very quick movements (saccades) of 4 to 15° from one point of foveal view to the next one, and the brain completes the intermediate ranges to the final impression. The process of analysing an object is much facilitated if it offers elements in density, size and distance that are in accordance with the scanning process of the saccades. The analysis of an object is especially easy and full of pleasure if the eye’s saccades are guided over the whole object with a system of order like in a well-done composition of a painting or a façade. Then, we perceive the object harmonically and perhaps finally aesthetically. A fractal is a mathematical set that exhibits a repeating pattern displayed at every scale. They have the potential to guide the eye over the different diminutions. In literature, different, as well-composed, generally approved objects (like paintings), were analysed to determine their fractal dimension. It was found as being located in a small range that can hold as recommendation for future design processes. The paper deals with the transfer of those findings to façades. Here, two typologies were created, one façade rich and one poor in elements, their fractal dimensions were determined. As a result, the façade rich in elements fits well with the range that is preferred by the human eye but the poor one does not; it does not offer enough elements for the saccades to facilitate the process of analysing. A recommendation can be derived for the size, number and distance of elements in façades for different viewing distances to support the eye in the perception process. A fractal character in the arrangement of these elements would further encourage a joyful view.

NATURE-INSPIRED ARCHITECTURE OF LAURIE BAKER AND TOYO ITO: A COMPARISON

SYMBIONT: FLORA AND FAUNA AS INHABITANTS OF ARCHITECTURE

PROBING POTENTIALS OF DIGITAL AND PHYSICAL MODELLING IN CONSTRUCTION COURSES

HUMAN PERCEPTION AND AESTHETICS OF FA&#x00C7;ADES

INFLUENCE OF MATHEMATICAL COMPOSITION FOR PUBLIC SPACE IN THE EXPERIENCE OF USERS: ALEJANDRO ZOHN&#x2019;S WORK 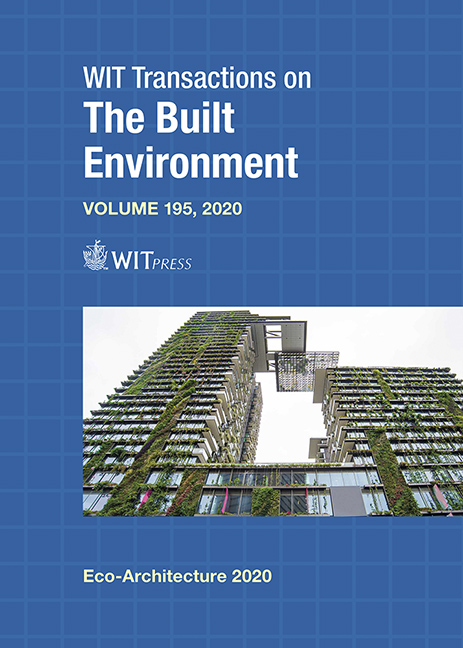 NATURE-INSPIRED ARCHITECTURE OF LAURIE BAKER AND TOYO ITO: A COMPARISON

SYMBIONT: FLORA AND FAUNA AS INHABITANTS OF ARCHITECTURE

PROBING POTENTIALS OF DIGITAL AND PHYSICAL MODELLING IN CONSTRUCTION COURSES

HUMAN PERCEPTION AND AESTHETICS OF FAÇADES

INFLUENCE OF MATHEMATICAL COMPOSITION FOR PUBLIC SPACE IN THE EXPERIENCE OF USERS: ALEJANDRO ZOHN’S WORK