A STATISTICAL APPROACH TO THE ESTIMATION OF BICYCLE LEVEL OF SERVICE MODELS FOR THE CICLORUTA IN BOGOTA, COLOMBIA

Understanding the perception of level of service (LOS) of cyclists can be useful in developing a planning strategy for promoting intra-city bicycle commuting. In Bogota, the enormous resource investment in the Cicloruta system requires a regular infrastructure audit to ascertain its level of performance. Videos of 16 segments and 8 intersections were carefully collected and showed to participants who rated their level of satisfaction using a 6-point scale (A–F – ‘highly satisfied’ to ‘highly dissatisfied’), equivalent to 1360 segments and 680 intersections (2040 total ratings). The perception data was augmented with geometrical, physical and operational characteristics of traffic in the area. Most participants fall within ages of 18–35 in both male (88.9%) and female (77.4%) while bicycle ridership also revealed more riders in male (75.9%) than in female (58.1%). The study showed that 69.4% of participants ride bicycles in the city while 30.6% do not. Ordered probability models were used to estimate random parameters of cyclists LOS perception to account for unobserved heterogeneity for all respondents. Bicycle level of service (BLOS) was strongly influenced by side path separation (β=0.605, p<0.05); vehicle speed (β=0.717, p<0.05); motorised traffic volume (β=-0.381, p<0.05); and conflicts with pedestrians (β=1.173, p<0.05). Furthermore, other factors were also found to have high probabilities to influence LOS including bicycle lane width, wide outside lane, pavement conditions, trees and benches, daylight, gender and the experience of the cyclist. A model for intersection LOS was estimated, the results of which results reveal that the volume of cyclists (β=1.116, p<0.05), conflicts with pedestrians/other cyclists (β=1.048, p<0.05) and total intersection legs (β=-0.365, p<0.05) are factors with a high influence on cyclist’s LOS. The variety of factors affecting bicyclists reveal the nature and character of urban transportation in Bogota and suggest a range of important recommendations such as education and public enlightenment of cyclists and motorists , in further planning and management of the Cicloruta. 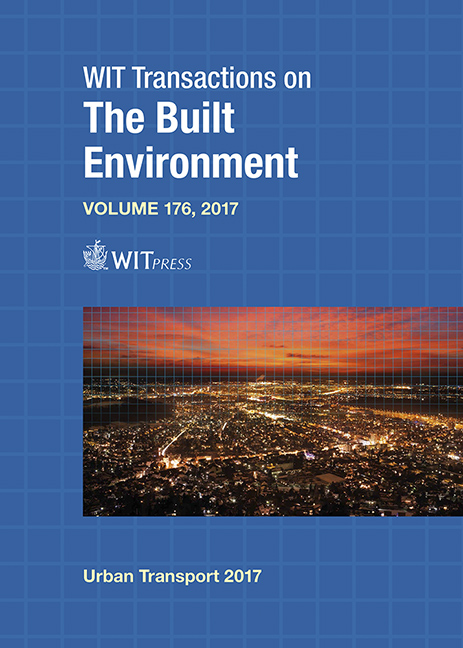