The United Nations Office implemented the disaster risk profile idea for disaster risk reduction as one of the tools in the development and country’s disaster risk reduction. Due to the worldwide agreement, the Sendai Framework of Disaster Risk Reduction 2015–2030 has one of the priority actions to understand the risk before taking further steps to plan and operate. Furthermore, the knowledge of the emergency management has the topic of the critical infrastructure that needs to be protected to make it operate as usual during the emergency to prevent the worst case. The public healthcare system is one of these critical infrastructures. This research followed this concept and focused on the disaster problem in Thailand, which its major disaster type is a flood. The data from the Department of Disaster Prevention and Mitigation, Ministry of Interior, reported that during the fiscal year of 2010–2019, 48,543 THB of government expenditure on the emergency help cost was used to ease the flood disasters. Thus, this research paid attention to the development of the disaster risk profile in the public healthcare system during the flood situation. The study area was Nakhon Sawan Municipality, Nakhon Sawan Province, Thailand, one of the significantly affected areas from the 2011 Thailand floods. The main target referred to the operation during the 2011 floods in the study area. This research applied the BPMN 2.0 to understand the operation process and the cooperation during the flood situation. The model could explain the function and responsibility of each organization and the disaster risk profile, by focusing on the operational level during the flood situation. The outcome of this was the risk profile and the suggestion to conduct the policy in the next step.

EFFECTIVENESS OF GOVERNMENT RESPONSES AND THE ROLE OF NATIONAL CULTURE IN ADDRESSING THE COVID-19 PANDEMIC: A GLOBAL PERSPECTIVE

ROLE OF AWARENESS TO PREVENT PERSONAL DISASTERS: REDUCING THE RISKS OF FALLING FOR PHISHING BY STRENGTHENING USER AWARENESS 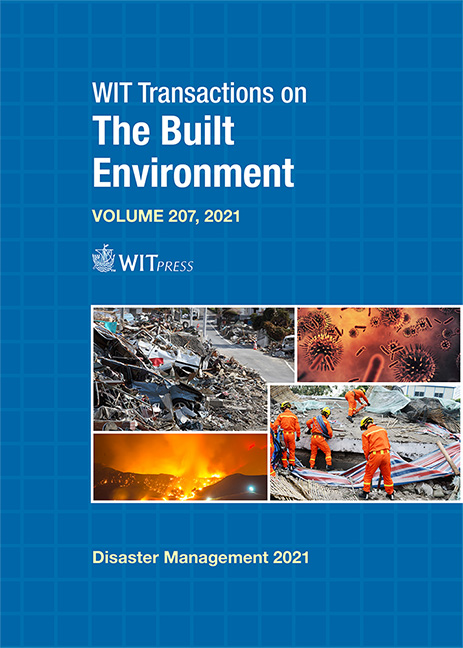 EFFECTIVENESS OF GOVERNMENT RESPONSES AND THE ROLE OF NATIONAL CULTURE IN ADDRESSING THE COVID-19 PANDEMIC: A GLOBAL PERSPECTIVE

ROLE OF AWARENESS TO PREVENT PERSONAL DISASTERS: REDUCING THE RISKS OF FALLING FOR PHISHING BY STRENGTHENING USER AWARENESS