In the conventional methods of structural optimization, the designers reduce the structural cost or weight without taking into account uncertainties in the materials, geometry and loading. In this way, the optimum solution may represent a lower level of reliability and thus a higher risk of failure. However, the objective of reliability based design optimization (RBDO) is to design structures that are economic and reliable. In this paper, external loads and member resistance are assumed to be independent random variables. To identify critical failure modes, the  -unzipping method is used and the probability of failure of each mode is calculated using the method of reliability analysis of parallel systems. By combination of the different failure modes as a series system, the probability of failure of the total structural system is estimated. The effects of the semi-rigid behavior of the beam-column connections are also considered in the RBDO problem. The RBDO problem is formulated by the expected costs or structural weight as the objective function and the reliability of the system as constraints. This constrained nonlinear optimization problem is changed in to an unconstrained optimization problem using the method of interior penalty function. Then, this new problem is solved by an unconstrained optimization technique. Some numerical examples are presented to demonstrate the applicability of the proposed methodology. These examples illustrate the importance of the effect of the semi-rigid behavior of the connections in the calculation of the minimum weight of the steel frames. Keywords: reliability, structural optimization, steel frames, semi-rigid connections, probability of failure.

A Practical Solution To The Shape Optimization Problem Of Solid Structures

Some Improvements In Minimum Weight Topology Optimization With Stress Constraints 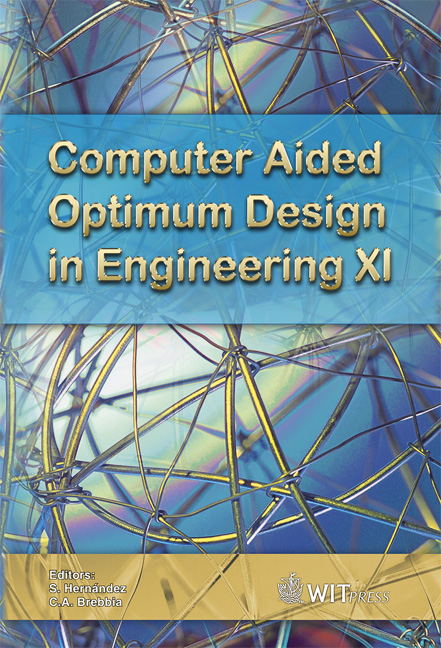 A Practical Solution To The Shape Optimization Problem Of Solid Structures

Some Improvements In Minimum Weight Topology Optimization With Stress Constraints