This contribution analyses the spatial support of sampling points used to express the presence or absence of NO3- pollution in the water table. A spatial database constructed for the assessment of ground water vulnerability is re-analysed with a different predictive strategy. In practice, a case study area surrounding the city of Milan in northern Italy becomes an opportunity to point at a very general prediction modelling problem in which the basic direct evidence of a process is obtained only by sampling with point like measurements of nitrate concentration, as the ones from drill holes or water wells. The main questions are: “What is the functional spatial support for the modelling?” and “What happens if different spatial supports are assumed?” The answers to these questions are counterintuitive. Over the area of study of about 2,000 km2, the distribution of 305 water wells delimits a training area in which 133 wells are considered as impacted by nitrate pollution, i.e., direct supporting patterns of the modelling. The remaining 172 wells are considered as non-impacted. In the training area, nine natural and anthropogenic map data are assumed, as indirect supporting patterns of the modelling, to reflect both the potential source of nitrates and the relative ease in which nitrates may migrate in ground water. They cover the entire area of study. A mathematical model is used that computes spatial relationships between the direct and indirect supporting patterns based on empirical likelihood ratios. The relationships are integrated into prediction patterns and, by iterative cross-validations, into target and uncertainty patterns. These are then extended from the training area over the remaining much larger study areas for analysis and visualization. Square neighbourhoods of dimensions 20 × 20 m, 60 × 60 m, 180 × 180 m and 1,020 × 1,020 m around the 305 wells are used to delimit four training areas of different sizes. Surprisingly, the smaller spatial support appears as the most reliable.

MULTI-CRITERIA ASSESSMENT OF THE SEISMIC VULNERABILITY OF SCHOOL UNITS IN VASLUI CITY, ROMANIA

RISK ASSESSMENT ON MACHINES WITH CE MARKING AND WITH EMBEDDED INDUSTRY 4.0 ENABLING TECHNOLOGIES

LITERATURE REVIEW ON SPECIFIC TYPES OF RISK FACED BY FIRMS 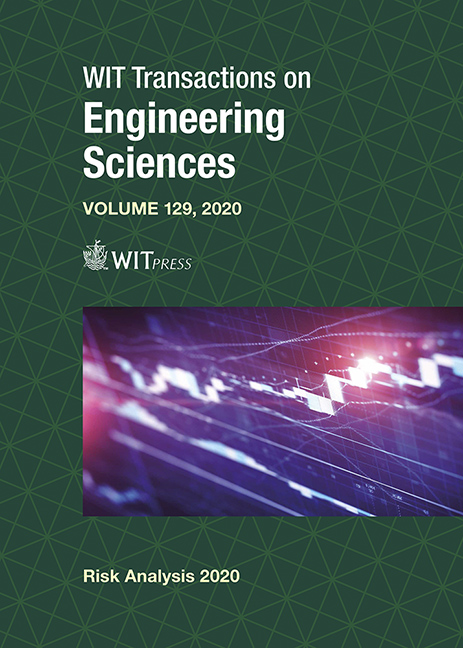 MULTI-CRITERIA ASSESSMENT OF THE SEISMIC VULNERABILITY OF SCHOOL UNITS IN VASLUI CITY, ROMANIA

RISK ASSESSMENT ON MACHINES WITH CE MARKING AND WITH EMBEDDED INDUSTRY 4.0 ENABLING TECHNOLOGIES

LITERATURE REVIEW ON SPECIFIC TYPES OF RISK FACED BY FIRMS