Dwell time is the time a loaded rail transit spends in a station, which consists of operation time, standby time, and passenger flow time. Among these, passenger flow time, the time required by passengers to board and alight (i.e., boarding and alighting time), is the key factor that determines the dwell time. Wide fluctuations in boarding and alighting time are found in crowded urban areas, especially in a megacity such as Seoul. Accordingly, it is very important to accurately assess the boarding and alighting time for the efficient scheduling of an urban rail transit. Numerous studies have been conducted to develop the prediction model in many countries. However, most of the suggested models were developed based on the light rail transit, so it may not be appropriate to apply those models to the heavy rail transit that is mainly running in Seoul. Furthermore, the passenger behaviour, which is one of the key influencing factors, varies depending upon behavioural devices such as bleepers, indicating that doors are closing or platform screen door, etc. Hence, the existing models developed under different circumstances cannot be applied blindly to the assessment, and the limitation of those models should be evaluated. In this study, existing models are evaluated by the regression analysis of data measured in Seoul metro green-line. Then, a novel boarding and alighting time model is proposed. The superior performance of the proposed model is demonstrated by comparing the adjusted coefficient of determination. This model can be employed to schedule train operation as well as to assess time consumption if the boarding and alighting passengers are given.

The Integration Of A High-speed Train Station In Valencia City

A Roadmap For The EU White Paper Goal On Urban Transport

Can We Integrate Land-use And Transport Planning? An Investigation Into The Use Of Travel Planning In Regulation 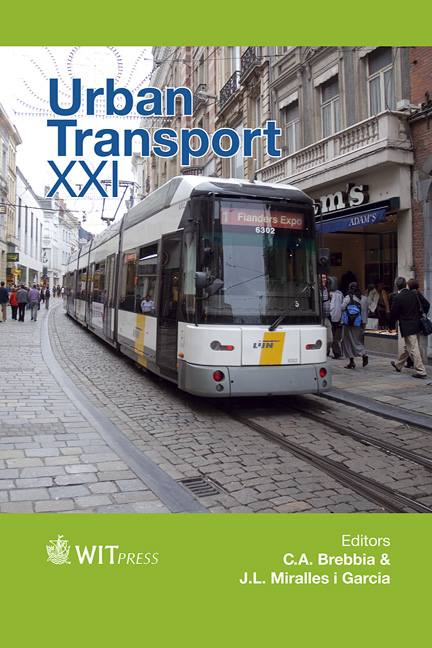 The Integration Of A High-speed Train Station In Valencia City

A Roadmap For The EU White Paper Goal On Urban Transport

Can We Integrate Land-use And Transport Planning? An Investigation Into The Use Of Travel Planning In Regulation

When Cycle Paths Are Not Enough: Seville’s Bicycle-PT Project