The catastrophic fire that struck the continuously-inhabited Middle Byzantine Hilandar Monastery, the Imperial Serbian Lavra of the Most Holy Mother of God (Mount Athos, Greece) in March 2004 came, ironically, at the completion of the Serbian authorities’ eighteen year conservation plan. Two 12th Century towers, acting as fire-breaks, saved the older south courtyard and katholikon from destruction, but more than half of the monastery’s masonry and timber enclosure, 5761sqm, was lost. Major fires have periodically destroyed Athonite monasteries in whole or part, but Hilandar’s will be the first wholesale reconstruction in the last century and is, thereby, an unprecedented situation in which a very significant proportion of a World Heritage Site is to be rebuilt anew within the minimal remaining standing masonry walls and substructures. The conservation works of the pre-fire era in the main walled enclosures towers, treasury, refectory, the largely abandoned Saint Basil monastery site, monastic port and hermitages generally set a standard to be emulated The stabilisation, protection and cleaning of the ruins began immediately and work is to be completed ca 2022. The first five year phase of the fire reinstatement of the intramural heritage structures, the focus of this paper, included the completion of: the porter’s lodge/portarnice, St. Nicholas chapel/Paraklis Svetog Nikole, (1814), the Range/Konak (1814) and the shell of the 1816–1821 Range/Konak. This Serbian-Greek reinstatement/conservation project necessitates negotiating the balancing of support of the monastery’s spiritual and daily life (i.e. rebuilding the destroyed administration offices, medical clinic etc) and work and economy (i.e. bakery, painting restoration lab etc) relating to Hilandar’s surviving spaces and moveable heritage, and long-term reinstatement of hostels, work and storage sheds needed in order to initiate this scale of heritage structure reinstatement. For over a century, until 2004, the expert supervision required to cope with the Hilandar’s heritage came solely from religious and secular entities in Belgrade, but the extent and value of the recent loss triggered a new protocol led by the Thessaloniki-based Centre for Protection of the Heritage of the Holy Mountain and scrutinized by UNESCO and ICOMOS for ‘this Serbian project in Greece’. Keywords: architectural heritage, conservation, reconstruction, issues.

Difficulties In The Design For Conservation Of Archaeological Remains: The G1 Temple In My S&#417;n

Evolution Of The Lighthouses Of Gdansk

Characterization Of Space Around Japanese Traditional Buildings: Transitions Of Layout Plan And Meaning Of Space Of Darkness Inside Wooden Temples

Desalination For Preservation Of Murals By Electromigration And Regulated Climate 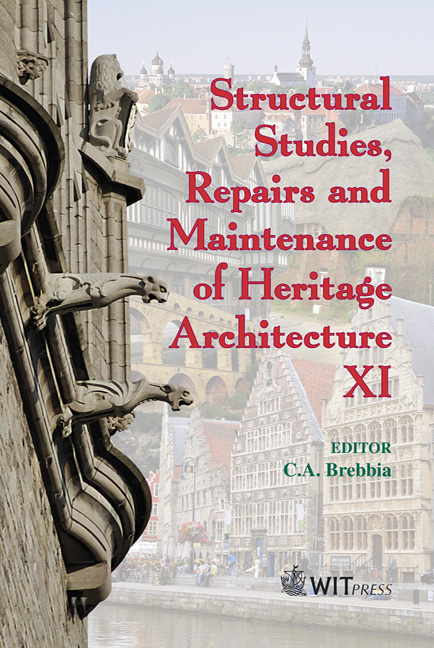 Difficulties In The Design For Conservation Of Archaeological Remains: The G1 Temple In My Sơn

Evolution Of The Lighthouses Of Gdansk

Characterization Of Space Around Japanese Traditional Buildings: Transitions Of Layout Plan And Meaning Of Space Of Darkness Inside Wooden Temples

Desalination For Preservation Of Murals By Electromigration And Regulated Climate