Natural convection around a horizontal, isothermal cylinder in an infinite, fluid-saturated porous medium is modeled analytically using the Darcy flow model. The full stream function and energy equations for two-dimensional flow are solved simultaneously using truncated Fourier series for both the stream function and the temperature. The coefficients in the Fourier series were determined by solving one- dimensional ordinary differential equations. The two-dimensional flow and temperature fields are determined for modified Rayleigh numbers from 0.1 to 10. Local and average Nusselt numbers are given as functions of the modified Rayleigh number. Introduction The heat transfer and fluid flow due to natural convection around an isothermal pipeline buri 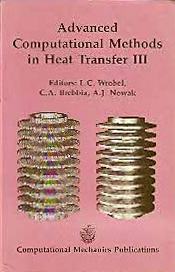