Theprimary aim ofthe research was to predict the effect ofthehormone angiotensin 11 (angI1) anda blocking drug Losartan on the heart. Itisbelieved that the hormone is one cause of hypertension. As the hormone will be absorbed by the heart wall during the filling of the heart (diastole), only the blood flow in the left ventricle was simulated during the diastole stage. The simulation assumed that the pulmonary and aortic valves were closed so that the inflow to the atrium issimulatedby distributedsourceswithin the atrium. Conservationofmassis maintained by sinks distributed outside the ventricular membrane. The solution of the Navier-Stokes equation used a two step finite difference method. In the usual solution, an initial estimate of wall velocity at each time step is undertaken using the elasticproperties of the wall. Thisprocedure yieldswall shapeswhich are dependent on the stress strain properties assumed for the heart wall but may not result in thecorrectshape of theactual heart. In thepresent method,the wall velocity and wallshapewerederived fromapatient cine-angiogram at various times.Thusthe correct wall shape was maintainedthroughoutthediastole.The macroscopic flow was calculated including the usual vortices in the left ventricle. For the present purposes the interactionof thebloodatthe wall surface wasof primaryinterest. The blood componentsand drugcouldeitherdiffuseorbe convected to the wall. An examination of the interaction at various sites showed that some sites on the wall are more likely to lead to the initiation of hypertension and subsequent hypertrophy of theheart.Inadditiontheeffects the Losartan on this process were also calculated.

Coupling Of Vascular MRI-velocity And CFD

An Explicit WET-type Model For The Turbulent Scalar Fluxes 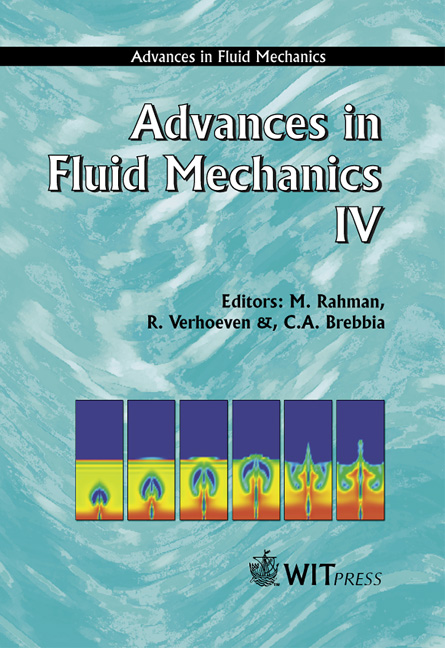 Coupling Of Vascular MRI-velocity And CFD

An Explicit WET-type Model For The Turbulent Scalar Fluxes