Edited By: S. Hernández, University of A Coruña, Spain

In this study a semi-circular cylinder at a wind incidence angle of 0° (rectilinear side parallel to the flow) has been adopted as a wind-excited bluff body for low-scale energy generation. This geometry has shown vortex-induced vibration (VIV) at low wind speeds and galloping excitation for higher values inside the studied range. The preliminary results of a wind tunnel campaign conducted using a sectional model of a semi-circular cylinder are reported and both VIV and galloping phenomena were identified, along with a relatively infrequent VIV-galloping interference case for the torsional degree of freedom. Based on these results, a prototype of an energy harvester has been designed and constructed. This prototype has also been studied by means of wind tunnel tests, obtaining the voltage output and the average power output for different wind speeds. Both VIV and galloping excitation were identified, finding that the power generation is larger for higher wind reduced speeds, as the prototype experiences galloping. For the prototype at 0° angle of attack, nondimensional amplitudes of oscillation up to 0.3 were measured, while the averaged power output reached 1700 µW. This work has signalled additional issues to consider for a throughout characterization of the harvester such as turbulent incoming flow or different angle of attack between the wind and the bluff body.

Edited By: S. Hernández, University of A Coruña, Spain

EQUILIBRIUM OF A JOURNAL BEARING: A SIMPLIFIED CFD-ANALYTICAL COUPLED APPROACH

MEASUREMENT AND MODELING OF SUSPENDED SEDIMENT DYNAMICS IN WATERCOURSES 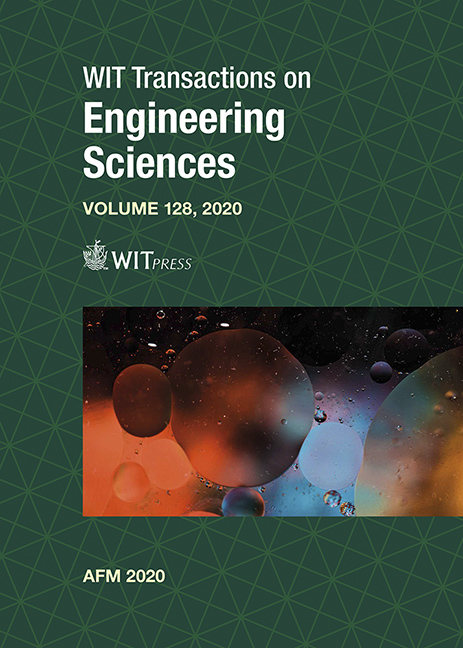 EQUILIBRIUM OF A JOURNAL BEARING: A SIMPLIFIED CFD-ANALYTICAL COUPLED APPROACH

MEASUREMENT AND MODELING OF SUSPENDED SEDIMENT DYNAMICS IN WATERCOURSES