Given the increasing phenomenon of Sinkholes all over Italy, the Gruppo Nazionale per la Difesa dalle Catastrofi Idrogeologiche (G.N.D.C.I) and the Dipartimento della Protezione Civile (D.P.C.), during 2004, started a plan called Sinkholes dedicated to the phenomena in Italy. The plan provides the publication of the database realized by the D.P.C. by means of the census of beyond 1000 cases scattered across the nation. The city of Marsala is strongly characterized by the presence of a great number of Calcarenite cavities. The material object of extraction is the Calcarenite di Marsala of the Pleistocene, frequently used in the construction of buildings. The presence of the underground cavities in the city subsoil has in the last few decades caused a series of landslides whose frequency has visibly increased. The sinkholes have affected buildings and infrastructures. In the case of the evaluation of the hazard following the collapse of an underground cavity it is not possible to do probabilistic evaluations on the occurring events in a definite period. Such difficulty can be overcome if the concept of hazard is replaced with that of danger where no probabilistic term is included. In this context a methodology for the evaluation of the risk of Sinkholes proposes to foresee the identification of hazard expose areas and estimates the hazard H factor and potential damage D factor. Every factor will be given a weight, chosen inside of established classes of value. Through combination of the two factors, hazard H and potential damage D, risk will be determined. The risk areas will be subdivided into zones with different degrees of exposure to the danger. In order to visualize and to localize the areas of interest by cavity and those already subject to landslides, a database has been realized, coordinated with a program GIS. Relatively to the areas subject to landslides, where possible, photographs, planimetries have been inserted and, in addition, a list has been compiled purposely proposed by the G.N.D.C.I and by the D.P.C. Keywords: sinkholes, hazard, risk analysis.

Risk Analysis Between Possible And Probable

Natural Hazard Risk Depending On The Variability Of Damage Potential

Risk Analysis In The Chemical Industry: An Urea-formaldehyde Resins Case

A Stochastic Approach To Rainfall Forecasting In The Space-time Domain: The PRAISEST Model 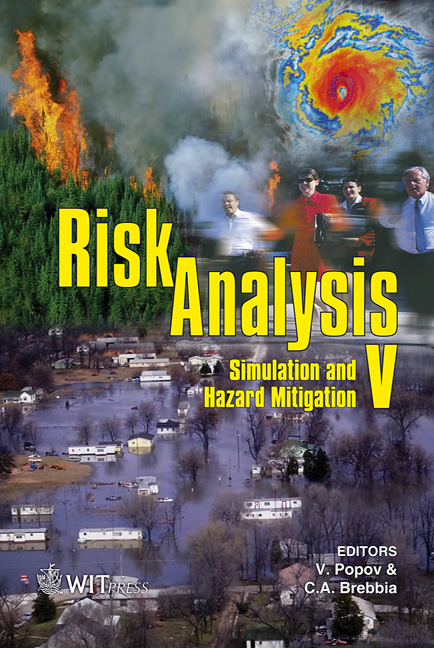 Risk Analysis Between Possible And Probable

Natural Hazard Risk Depending On The Variability Of Damage Potential

Risk Analysis In The Chemical Industry: An Urea-formaldehyde Resins Case

A Stochastic Approach To Rainfall Forecasting In The Space-time Domain: The PRAISEST Model